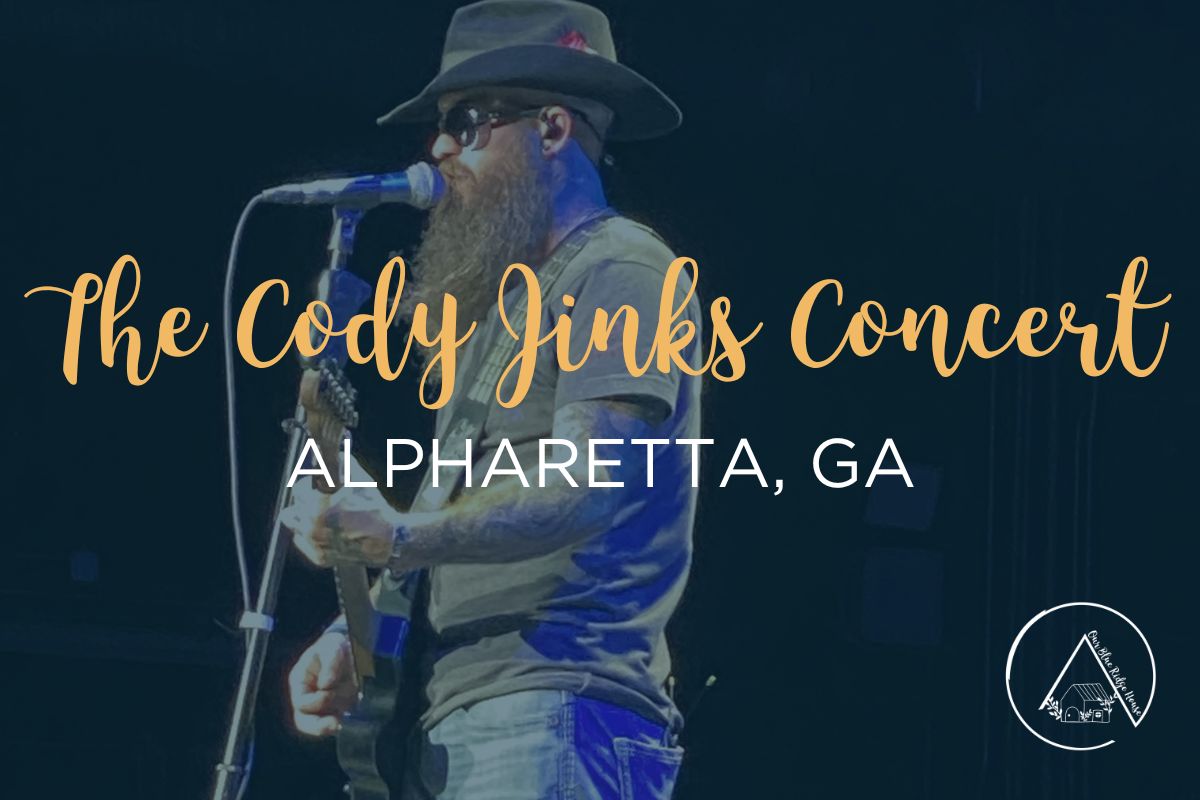 When first emerging, Cody Jinks was playing for nearly-empty bar rooms. Now Cody Jinks is the biggest independent country artist selling out venues across the country!

At the end of the post, you’ll see a short video recap of the show!

Who is Cody Jinks?

You may not have heard his songs on the country radio, but that’s because he is a solo artist that is making it beyond beliefs….all on his own!

Cody Jinks is a Texas native. During his concerts you’ll often hear him give love to his hometown of Forth Worth, TX.

Before becoming this amazing independent country artist, he started his music career as a lead singer of a thrash metal band. That heavy metal band was was known as the Unchecked Aggression.

After a short break from music, Jinks began playing outlaw country. The rest is history!

Before I describe the amazing concert, let me “set the stage” (had to) for the turn of events that went down.

Back in March 2022, Travis and I took our youngest daughter to her first Cody Jinks concert in Knoxville, TN

. Being that she knows his old songs and new songs by heart, she was beyond excited. You can read more about that concert, here, if you’d like.

While there, she wanted so badly to get a Cody Jinks pick. Not just any pick, but one that he used for the show and threw out to the crowd. Yes, we sat close, but not close enough to make that happen.

In the months that went by following the concert, Skyler began taking private guitar lessons. Although just learning how to strum and change cords, she asked her coach to teach her how to play “Birds” by Cody Jinks. As she practiced, she said several times that she wish she had a Cody Jinks pick to use.

We Got the Tickets

One day, in early August, Travis and I stumbled across more tour dates. Right then, we decided we were going to take a road trip to Georgia to see Cody Jinks with special guests Ward Davis and Clint Black. Epic; right? Not yet. It get’s better!

Not only did we decide to go to the concert, we decided to splurge and get front row seats. Holy shit…now the excitement is real! It was going to be our first time in the front row to see our favorite independent artist!

Skyler’s first thought was we have to get a pick. She was so sure of the possibility, the morning of, she even made a sign for us to hold up and show Cody during the concert.

With sign in tote, we packed up, drove to Georgia, hung out with our friends, and got ready for the concert.

We arrive at the Ameris Bank Amphitheater, and knew right away it was going to be a beautiful venue. Alpharetta Georgia is a very nice area.

We took our pregame car selfie, and waked to the gates.

It was a beautiful day for a kick-ass concert. The weather was hot and sunny, but nothing to complain of for mid August in the south.

Security moved us through, we waited for 15 minutes or so, then the gates opened. Ahhhh….here we go straight to the merch tent.

As we’re standing in line at the merch tent, we were talking about which t-shirts we wanted, then it caught my eye!

Oh man, there are two signed guitars hanging on the wall for sale! I immediately wanted to get the white one, but the price made us think twice.

Now, it’s our turn to order, and we weren’t ready to pull the trigger on that purchase. Travis gave me the typical “think it out” look that he always gives.

Needless to say, we walked away happy with 3 new Cody Jinks shirts in our bag.

With our $8 waters in hand, and a clear bag full of t-shirts, we made our way to our seats.

Security slipped us our stamps and wristband that needed to be in the pit and front row. Yes, front row, seats 1 and 2!!

We made friends with the security people by our seats, and chatted with them until the first special guest came on stage.

Here’s where it gets’ good…

First up, Ward Davis. If you don’t know, Ward Davis is a American Singer Songwriter from Monticello, Arkansas. Funny enough, he even writes some of Cody Jinks’ songs!

He warmed up with crowd, and ended with a tribute to Freebird!

Let’s break here to circle back to the signed guitar notion that we had.

As we’re watching Ward Davis play, I couldn’t help but bring it up again. That signed guitar was calling me. Finally, we went back to the merch tent to purchase it. The positive energy was still flowing our way.

There was one more guitar for sale. We got it!!!

Holy shit, we now own a signed guitar by Cody Jinks! So grateful!

As Ward Davis jammed to Freebird, we made our way back to our seats. Afterwards, the stage crew handed out the Ward Davis Set Lists. Guess who got one….Travis!

Next up, the one and only Clint Black.

I don’t need an introduction to this country music singer, songwriter, musician, multi-instrumentalist, record producer, and actor. Do a search for Clint Black on the billboard country charts, and you’ll see why this was an epic concert.

Cody Jinks joined him on stage for the song you may know best – A Better Man.

Clint Black won an ACM for Single Record of the Year for “A Better Man,” and the song became the Number 1 country song of 1989.

When his set was over, guess who got a Clint Black pick…Travis!!!

The banner was lifted, the lights went down, and it was time for the show to start!

Immediately, I told Travis…”hold up the sign!”. Don’t forget, our daughter made a sign for us to hold up in hope to get a Cody Jinks pick.

He opens the show with “All it Cost Me Was Everything”…which is exactly what we felt for the front row seats we purchased. But totally worth it!

As he walked over, jammin’ on the guitar, Travis held up the sign, and sure as shit….Cody saw it!

He looked at Travis and lipped “I’ll get you one.” The pic below is from that exact moment!

A few songs went by, and we continued to sing along and dance it out to every single one!

If you’ve been to a Cody Jinks concert, you may already know he likes to get the crowd going with “Cast No Stones”. And that’s exactly what he did. The crowd was singing along, and everyone was feelin’ the vibe!

Then, Cody Jinks walks over to our side of the stage, and guess to he tosses a pick to….Travis!

Holy shit…believing and putting out the positive energy really does work friends.

Not only were we in awe about getting a pick and a signed guitar, we were greatly appreciating what Cody Jinks has accomplished.

From the first concert Travis saw in the little Goodyear theater in Akron Ohio to this sold out amphitheater in Georgia, Cody Jinks has set an example.

From future country stars to entrepreneurs like myself, it’s a lesson we can all take away from. Never give up on your dreams. Always be grateful for those who support you. Never take growth for granted. Do what you love and abundance will follow.